Skip to main content
HOME / PUBLICATIONS / RELIGION-SOCIETY-STATE RELATIONS / Between Torah Learning and Earning: A Society of Learners and Providers in London

Gonen A. Between Torah Learning and Earning: A Society of Learners and Providers in London. Jerusalem: Floersheimer Studies; 2005. 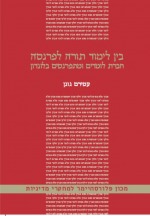 This study focuses on the correlation between Torah studies and employment in the ultra-orthodox community in London. The findings show that around two thirds of Haredi men work, usually in real estate, commerce or teaching, by contrast to the situation in Israel where the rate is around a third. It appears that London’s ultra-orthodox men seek balances between Torah studies and employment, which manifest themselves in the following categories: A full-time scholar who devotes his entire time to study; a part time scholar engaged in random employment during vacations; a part-time scholar who divides his time equally between study and employment; a breadwinning scholar who works and determines his own study schedule. But for all, the commitment to study remains an integral part of Haredi life.