Skip to main content
HOME / PUBLICATIONS / JEWS AND ARABS IN ISRAEL /
Land and Planning Majority-Minority Narratives in Israel: The Misgav-Sakhnin Conflict as Parable 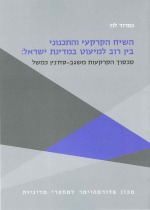 This publication examines the Sakhnin-Misgav land dispute in the Galilee as a test case for one of the main issues of majority-minority relations in Israel. The study outlines the various forces involved, directly or indirectly, in the protracted debates held by a special committee nominated by the Minister of the Interior on requests by the Sakhnin municipality to extend its municipal boundaries. The study mainly focuses on analyzing the characteristics of the discourse among the various factors involved in planning and lands uses, both in this particular case and on an overall national level. The analysis highlights the rise of new powers in the planning arena and the ongoing land discourse, and most particularly the appearance of civil groups and organizations.  Concurrently, central government does not relinquish its hold or influence on these issues, at times applying covert practices which endorse the inequitable spatial division.