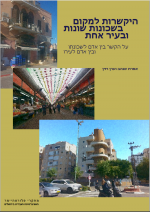 Qualities of place attachment influence the lives of individuals, their neighborhoods and
cities. Our study examined place attachment at the neighborhood and city scales in Tel
AvivJaffa. It is based on 22 interviews in five neighborhoods with diverse social backgrounds
and an analysis of 4 Facebook neighborhood groups as a virtual space for expressions
of place attachment. The study shows that despite globalization, the neighborhood
and the city remain significant for people. Poorer neighborhoods are objects of emotional
attachment that form place identity, whereas affluent neighborhoods are objects of functional
attachment leading to place dependence (local trust). Unique local narratives can
create, however, place dependence in disadvantaged neighborhoods and place identity in
affluent ones. Concerns of exclusion and displacement can lead to a loss of local trust, not
necessarily because of in-migration of edge-groups, but because of the "threat of the rich"
that leads to an identity loss in both disadvantaged and affluent neighborhoods. At the city
scale, the unanimous responses in all neighborhoods reflected a high level of attachment,
linked to “the Tel Aviv ethos”. Conclusions of the Facebook analysis confirmed the findings
that emerged from the personal interviews.
Society Space and Governance, Efrat Shenhav, 2018, Hebrew