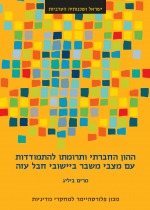 This study examines the value of social capital in crisis management under the circumstances confronting the settlers of the Gaza strip in recent years. Its findings show that the security risks and the threat of disengagement contributed to strengthening social capital in all settlements, and that social capital greatly contributed to the resilience of settlers in their confrontations. However, challenges are influenced by the cultural affiliations of each group, and it is this environment which ultimately determined the quality and long term influence of social capital. The study clearly concludes that wherever communities stuck together even after disengagement, their ability to face the crisis of evacuation improved.