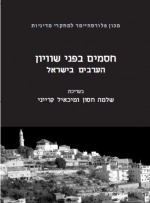 This book deals with two main questions: what are the barriers to the equality and the development of the Arabs in Israel? and how can the effect of these barriers be reduced?

The picture presented by the book is that despite certain improvements in the social area, especially in the area of education, the inequality between Jews and Arabs remains as it was.  The book offers a preliminary background for the analysis of the fundamental barriers preventing equality between Arabs and Jews in Israel.