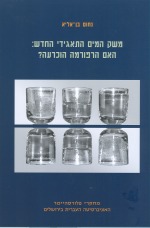 The municipal water system reform in Israel has long passed the point of no return, both from the perspective of the volume of population and its single-directional legal approach. However, this outcome hardly heralds the reform's conclusion. Completing the municipal corporatization is only one aspect of the reform and does not secure its success by standards of its own initial principles and goals. Analyzing the policy process of corporatization on a national level uncovers fundamental phenomena which may impede, without possibility of redress, the reform's stated goals, the public interest and the interests of consumers. In the face of this disturbing possibility this research attempts to reevaluate the corporatization reform and its possible impacts.