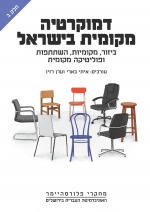 The democratic function of local authorities is often disregarded in the public discourse on local government and needed municipal reforms. This deficiency characterizes countries, including Israel, in which local government is not perceived as a cornerstone of national identity. Local democracy has three major functions: representation, consolidation of democratic values and pluralism. This book focuses on the democratic objective of local government in Israel. Its twenty-two chapters review key trends in local democracy and discuss its position in the public and political systems, in civil participation, management of civic life at the local level and local government elections. Four features of local democracy in Israel revealed in the chapters of the book are: distinction, centralization along with neglect, fragility and exploitation, and suspicion and protest. The challenges facing local democracy in Israel are manifested in several courses of action: from below – awakening of the local civil society; from within – adoption of new public management principles by elected politicians and bureaucrats in local government; from above – genuine decentralization of powers by the central state; and from outside – direct interaction with states and international movements, organizations and corporations.